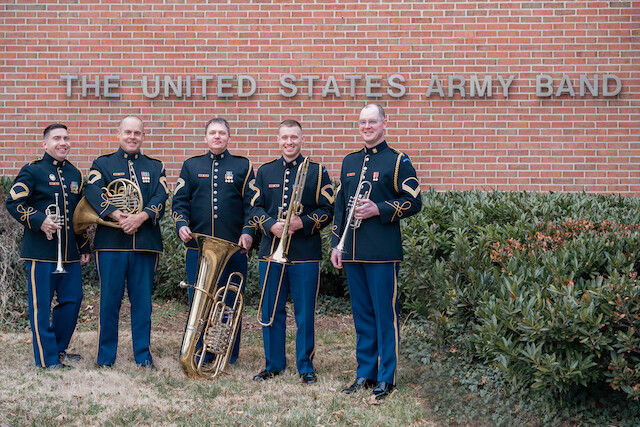 Since its inception in 1972, The U.S. Army Brass Quintet has gained a reputation as one of the most highly respected and sought after groups of its kind. The ensemble has appeared before audiences and dignitaries in 48 states and 14 foreign countries. An element of The U.S. Army Band “Pershing’s Own” in Washington, DC, The U.S. Army Brass Quintet has performed at the White House, presidential inaugurations, and official state ceremonies in the Nation’s Capital. They have been selected repeatedly as the first ensemble to honor new presidents with the traditional “Hail to the Chief” on live national broadcasts. The U.S. Army Brass Quintet frequently provides musical support for special events hosted by the Secretary of Defense, the Secretary of the Army, and the Army Chief of Staff, as well as for ceremonies supporting the Military District of Washington.

The group’s repertoire includes over 500 selections from all eras and genres of classical and popular music, interactive entertainment, video, and works for children.  The U.S. Army Brass Quintet continues a long tradition in support of music education. Outreach activities include frequent appearances at the Midwest Band and Orchestra Clinic, the International Trumpet Guild Conference, The U.S. Army Band’s annual Tuba-Euphonium Conference, and at high schools, universities, and conservatories throughout the United States and around the world.